"The main character of the game. Lip is a spirited, cheerful young girl with a strong sense of justice. Because her magic powers are weaker than the other fairies', she can't cast any spells without the help of her magic wand. Even so, Lip is going to do whatever it takes to bring peace back to Popples, so give her a hand!" ― Panel de Pon Official Website[[source]]

Appears outside of Vs. Mode?

Lip (リップ, Rippu) is the main protagonist of the original Panel de Pon game as well as the series as a whole.

Lip is a cheerful fairy with a powerful sense of justice who controls flowers.

She's a little tomboyish, but she still needs your help--she's the main character of this game!

Fairy of Flowers - Lip This energetic fairy uses her Flower Rod for good and justice. Although she is a bit of a tomboy, she is the game's heroine, so help her out!

Lip is a young girl who wears a pink skirt, yellow shirt with sleeve cuffs, sky blue belt, brown boots, pointy ears with blue earrings and maroon hair color. The hair consists of a swirl on the left side of her face, with a bow on the back of her head to the ponytail, around the end of the trail she has two blue beads on her head. She has flower symbol on her chest, and her boots. Pink bracelets are on the wrist of her hands.

Nice to meet you!

I am Lip, the Fairy of Flowers.

At the beginning of each round,

you'll get hints on how to improve!

Remove all the panels above the Clear Line.

If you can do that, the stage is cleared!

Hello there, I am the Fairy of Flowers, Lip!

This is terrible! Monsters invaded our world.

At this rate the water will flood our world!

On top of that they turned all fairies,

I have to return this world to be the way it used to be.

I must rescue everyone,

and defeat these wicked monsters!

E-everyone! It's a good thing we're all safe now!

Let's go and beat those monsters!

Her chain voice clip plays and raises her wand.

Walks then she has an explanation mark in her dialogue.

Loses in vs. Mode Death Mt.

How could I lose here!?

She may not appear in all Panel de Pon games, but she has made the most appearances out of any character!

Lip makes an appearance by entering a specific button combination in the game, this will lead you to the debug mini-game. Unlike the stage removal in other versions of Panel de Pon DS, this is accessible legitimately without a cheating device in Pokémon Puzzle Challenge versions of the game. This was discovered 13 years after the game's original release. Which also marks her first international appearance in the Panel de Pon series.

Lip makes a Japan-only cameo in Panel de Pon DS / Chotto Panel de Pon. The international Puzzle League releases of this game removed legitimate access to this stage. You can only use a cheating device to access the stage in those versions of the game.

Lip has been referenced several times outside of the Panel de Pon Series.

As this is Intelligent Systems next game released after Panel de Pon, Lip's name is used for Chapters 3 and 5 in the Arena portion of the game. Because the fan translators didn't know Lip, they translated her name as Ripp, Lipton or simply Rip. The purple colors of the guard is similar to Lip's pink color scheme, as well as the bow which likely references the harp instruments used in the title screen opening or freeing one of the fairies in Vs. mode.

Lip made a brief appearance in Satella-Q (サテラＱ Satera Q) alongside other Mario characters . The flower theming was for the 1998 Spring broadcast.

In Paper Mario, Minh T. uses the same name as Lip in the Japanese version of the game. Likely a reference as both characters are associated with flowers. She even shares the same hair color, which also includes the clothing.

Initially, she didn't appear in the series, her wand makes an appearance as an item called the Lip's Stick. It started appearing since Melee, the item gives a flower effect upon contact. The item also has a trophy. Her remixed Brawl theme is in the Pictochat stage in Brawl and in the Wrecking Crew stage in Wii U, Furil was mistakenly named Lip in non-Japanese versions of Brawl. In Super Smash Bros. Ultimate, she finally makes an appearance in the game's Spirits mode along with being an outfit for the Mii Swordfighter. She is a support Spirit in this game. 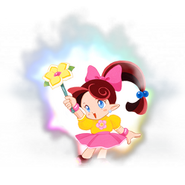 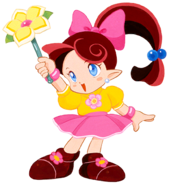 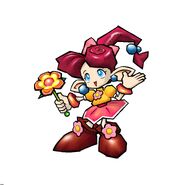 Lip's Artwork in Captain Rainbow
Add a photo to this gallery

Lip's outfit can be unlocked by playing the Panepon ( Puzzle League) game via mini game. Each of her items are named as Flower Fairy. Her wand also makes an appearance without her similar to the Super Smash Bros. Series. The items consist of a wig, dress, boots, and wand.

Her theme is the most recurring song in the series. Her theme is even in games where the fairies are not in the game or has limited availability. Only Furil has shared her, theme.

Lip on a swing in Popples

Lip holding up her wand

Lip running in the Vs. mode map.

Add a photo to this gallery

Retrieved from "https://panepon.fandom.com/wiki/Lip?oldid=2411"
Community content is available under CC-BY-SA unless otherwise noted.